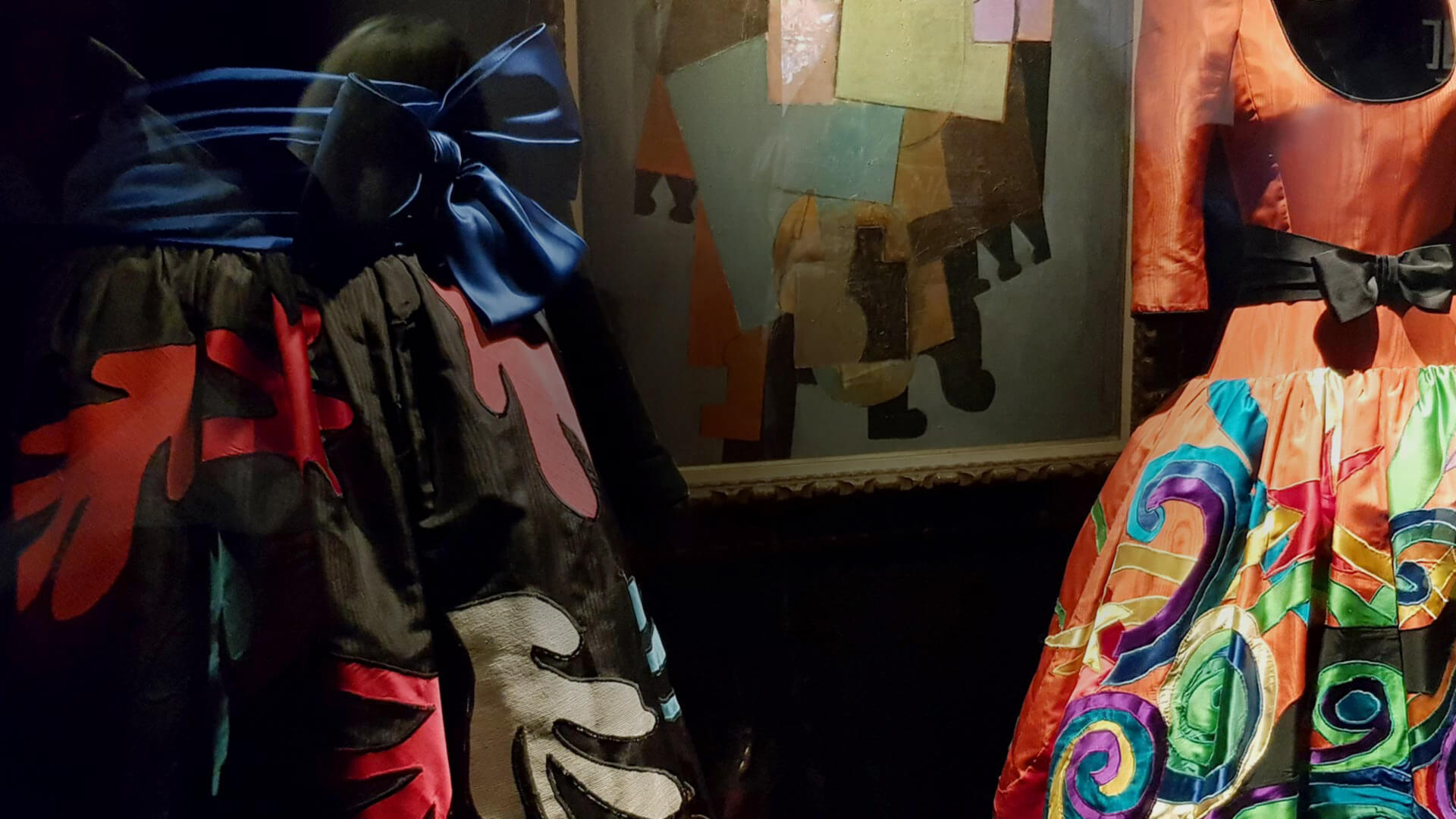 After working closely with the Yves Saint-Laurent and Pierre Bergé’s art collection shortly after the designer’s passing, a visit to the spaces opened in Paris and Marrakech became simply inevitable. Anticipation increased as this simultaneous museum opening came to mark the departure of Pierre Bergé, a fashion tycoon himself, and the one heading the development of these museums until his death last September. While the overall journey to both museums surely recalled a tone of contrast and coexistence, the first stretch to Paris, the one related below, immersed us into the story of a life deliberately framed in gold, black and white to exacting standards. 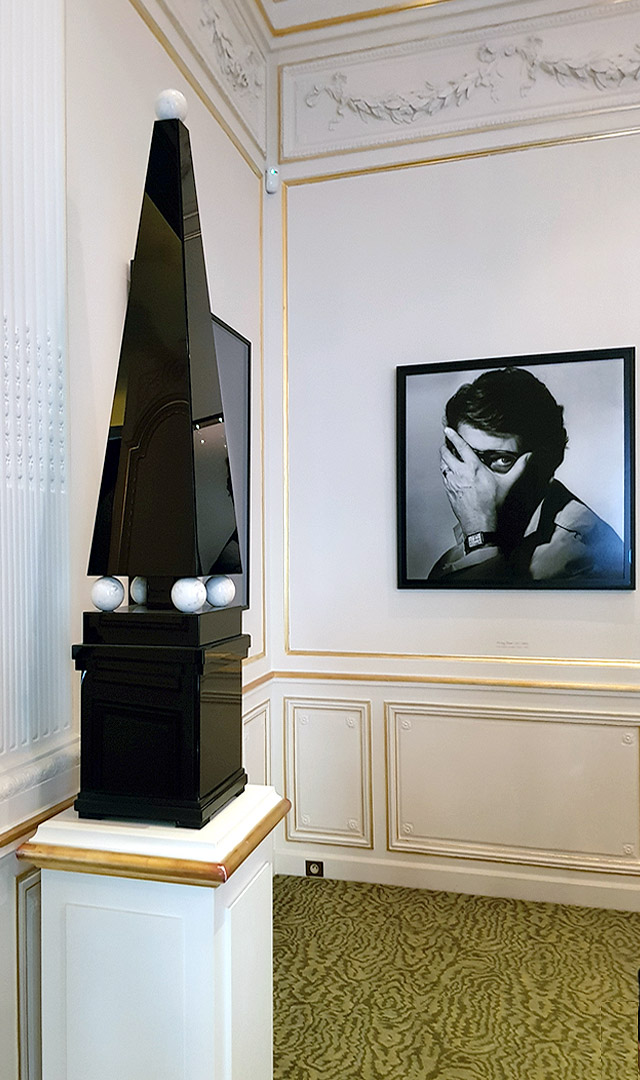 No items found.
Reception area of the YSL Museum in Paris. Portrait by Jeanloup Sieff.

Yves Saint Laurent emigrated to Paris aged 18, aiming to fulfill his dream of designing stages and costumes for theater as well as to venture into fashion. Having won a third place in the International Fashion Design Competition of the Wool Secretariat in 1953, Yves went on to take the first and third prizes for dresses entered to the same competition the following year, barely three months after his enrollment at the School of the Federation of Haute Couture in Paris. The rest is part of the well documented history of fashion, as he became Christian Dior’s apprentice at 19 and was named to succeed him as head designer for the House of the Dior being only 21.

2 years as head designer at Dior, during which he met Pierre Bergé, meant the essential shaping of a larger than life fashion persona. It took only 6 collections under the House of Dior, for Yves to declare design independence by transforming the woman’s silhouette of the time from restraining petticoat to emancipating fluidity. ‘Souplesse, Légèreté, Vie’ became the last collection under the Dior label, after which he was dismissed. This parting tacitly marked the beginning YSL Couture House and in a way of the Paris museum itself. 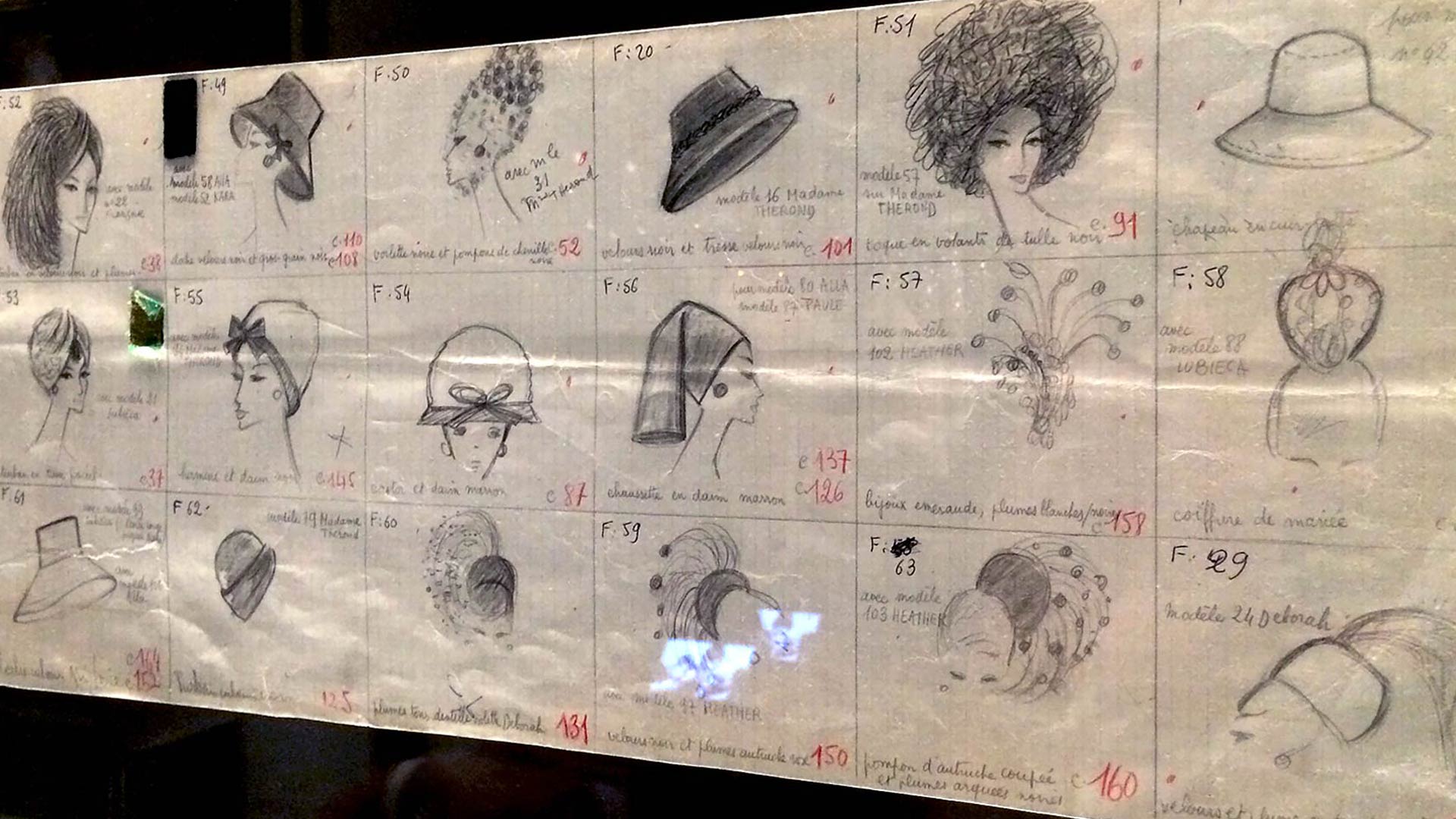 The collection displayed now at the YSL museums presents only a fraction of the vast corporate collection built under the guard of Pierre Bergé, whom along with Yves Saint-Laurent went to save, sketches, notes, accessories and models of all the garments designed by the House from 1962 until the designer’s retirement in 2002. From approximately 5000 garments, about 45 dresses are displayed in Paris along with accessories and relevant documentation, a concise overview of the significance of his career for the world of fashion. 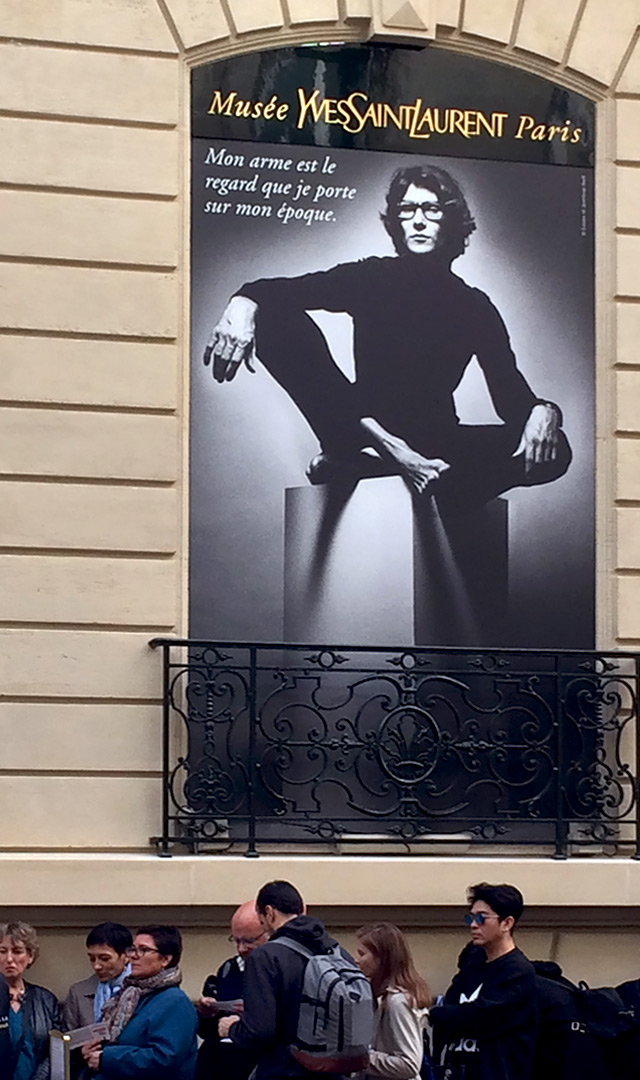 Upon approaching the museum, it was easy to see the building trimmed by a long row of visitors awaiting the timed entrance, and Jeanloup Sieff’s iconic portraits of Yves serving as an imposing envelope on the façade at 5 Avenue Marceau. Saint-Laurent’s alluring image as a 35 years old man dressed in jet black, welcomes visitors in a nonchalant way, yet clearly from a pedestal. 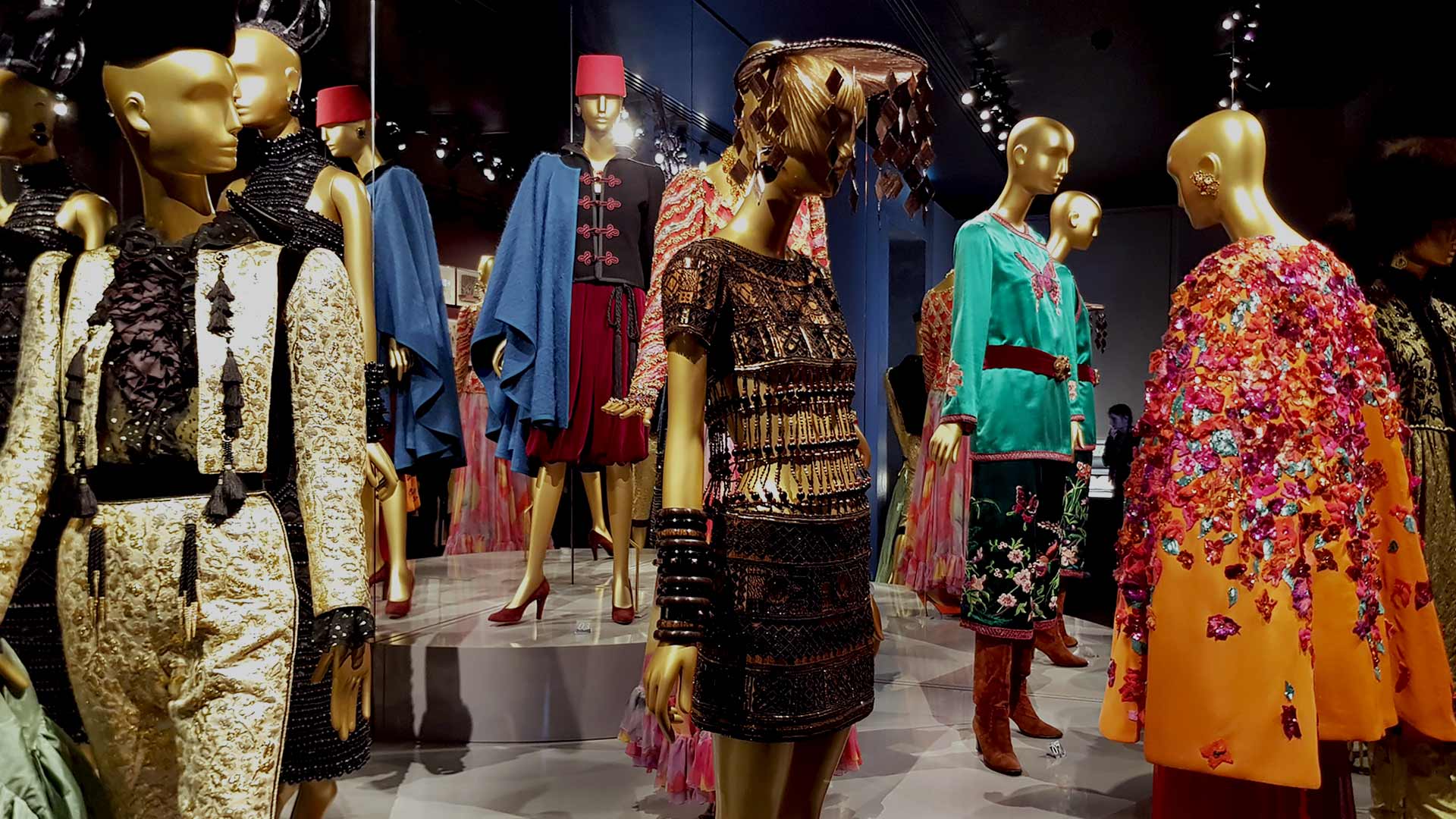 We bypassed it all to find ourselves in rooms refreshed by Jacques Grange with vignette-like displays designed by Nathalie Crinière, both of whom had already adapted the former YSL Couture House in 2004, when the Yves Saint Laurent – Pierre Bergé Foundation opened its doors with the Yves Saint-Laurent dialogue with Art exhibition. Being familiar with Yves Saint Laurent’s story, we passed over the video introduction and left our eyes meander through the gold details of the wood paneling juxtaposed to the boldness of a black and white marble sculpture, all framing a dapper Yves portrayed by Sieff again. 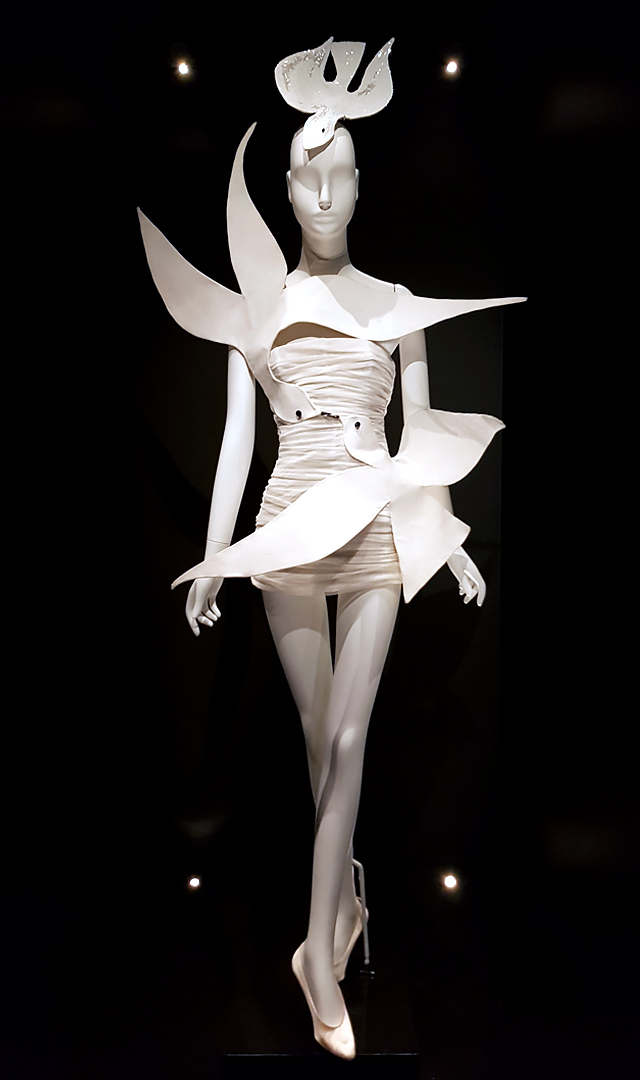 No items found.
Braque, Delaunay, Proust, Warhol, Matisse and Mondrian as influence for the garments displayed within the Aesthetic Phantoms gallery.

The first chapter certainly took our breath away, as it unveiled the painstaking creative process that gave birth to the first YSL collection in 1962. We followed with renewed admiration the sketches and collection boards we already knew, and yet discovered with fascination that head pieces had also been planned for each of the outfits. This layered glass composition turned us into voyeurs, only to find that for all the visual and material play of the collection, there was a literary seed, a handwritten note of Yves’ vision for his Spring woman: ‘She will be modern, simple and dynamic by day, mysterious and undulating at night…’ A few of the Black and white ensembles from the 1962 collection become a summary of the first chapter, and sinuously direct visitors to a contrasting space where craft, color and ethnicity take the stage. A wild display of saturated hues and explosive textures unfolds in the following room and hints at Saint-Laurent’s primordial linings: Africa sneaks from a corner as headpieces, accessories and collars, while fierce bougainvillea blossoms float embroidered on a cape. 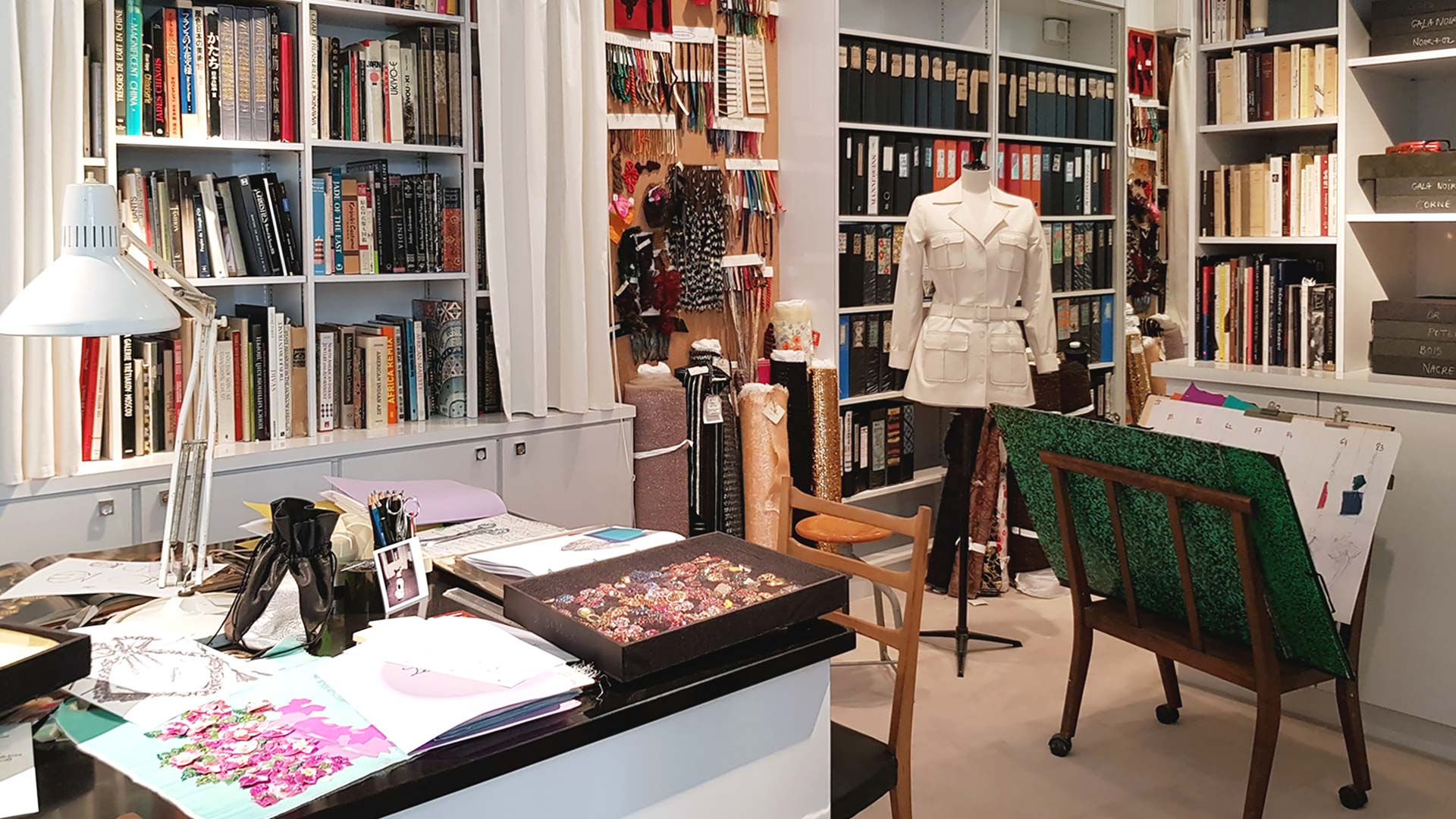 Further along the serpentine path one is carried through a mini history of fashion, a tale recounted by stunning YSL gowns that reveal via fabric and ornament, now the opulence of the Renaissance then the suppleness of the 1920s. Velvet, jacquard, silk, feather and countless rows of beads, display in a well-orchestrated symphony all the references that fed Yves’ imagination. A discreet yet magical entrance opens to what once was the designer’s studio. As if untouched from the moment of his retirement, the sketches, fabric samples, collages, books and photographs pile up reflected by an enormous mirror, which endearingly multiplies the image of his dog’s bowl along with the rest of his creative nest. Indeed, a masterful seal to the top floor of the exhibition. 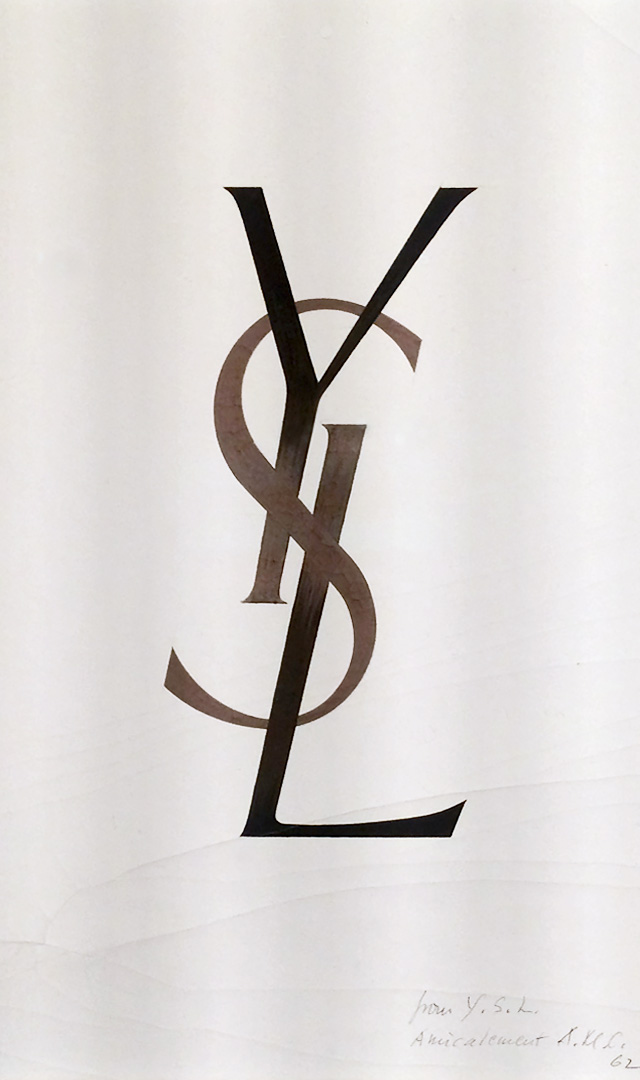 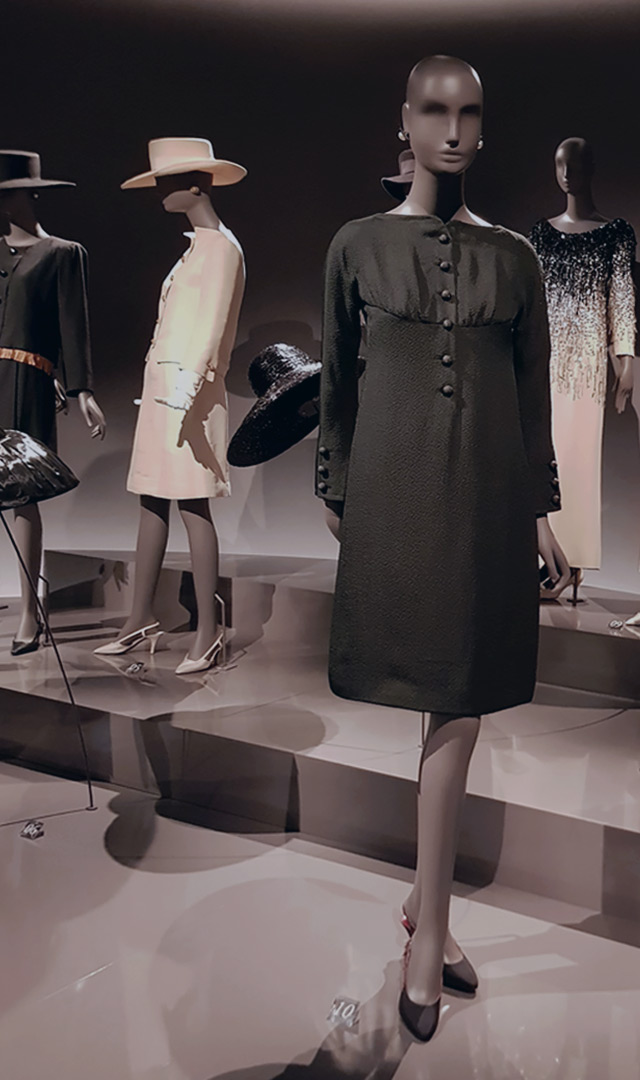 No items found.
The start of the Yves Saint Laurent fashion house story: 1962.

A narrow staircase lead us into a passage where accessories float brightly in a grid of square cases, a setting evocative of the cabinet of curiosities that the couturier and Pierre-Bergé had at their Rue de Babylone apartment. Once the brightness of this passage vanishes, the most memorable room emerges from darkness, a final space where Yves relationship with art is related through colorful garments. Sonia Delaunay swirls reinterpreted in a multicolor dress, Matisse’s cut-outs float on a black skirt, thousands and thousands of beads are raised in the embroidered impasto of Van Gogh’s sunflowers. A few steps further, the hues are called to order in the abstract Mondrian dress of 1966. Impressionist, Fauvist, Cubist and Expressionist threads were all brought to me in a single reflection, woven through the chronicles of times past emerging from a background projection, a recurrent homage to Proust, and other muses that were an intrinsic part of Saint Laurent’s creative universe. 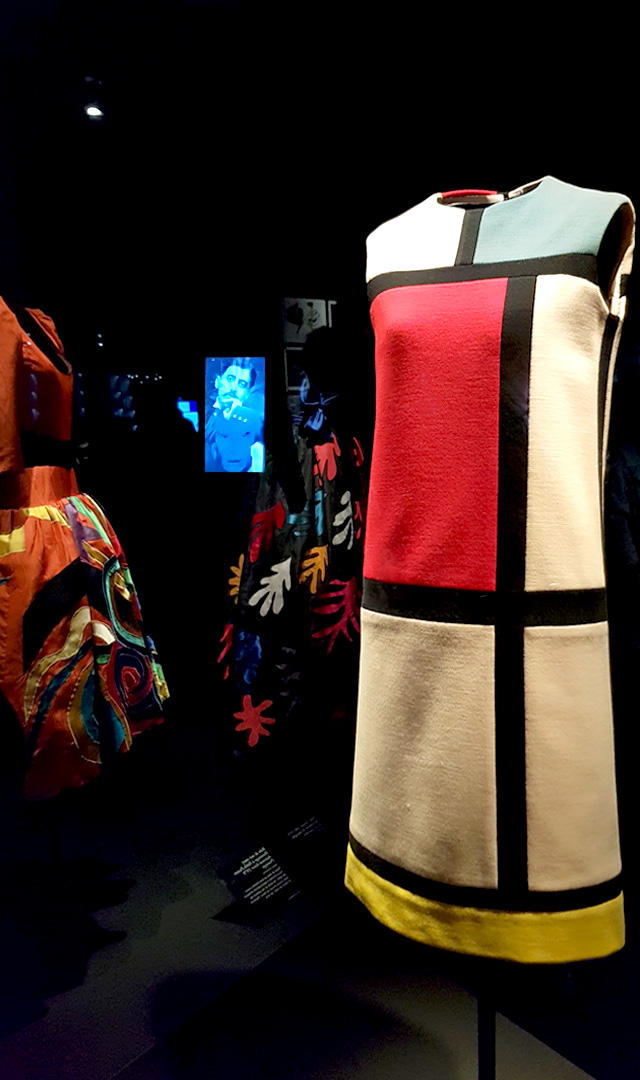 The inaugural exhibition will be displayed in Paris until September 2018 and until then a visit is highly recommended. It still worth noting that while finely suited for intimate journeys, the design of the set-up is a drawback when hosting large audiences due to its narrow passages and lengthily screenings. Nonetheless exceptional content, a visit will serve to any enthusiast as a brief introduction to a Western history of culture in the 20th Century, having fashion –and Saint Laurent– as a medium. 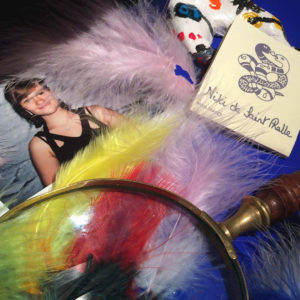 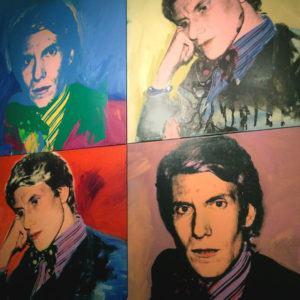